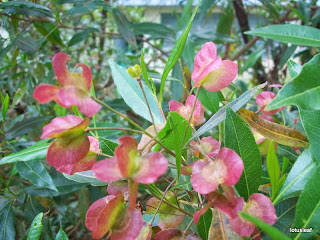 The Hardy Hopbush Dodonaea viscosa is distributed throughout the tropical and subtropical regions. In Australia, it was used in the preparation of beer, hence the name 'Hopbush'.It is a plant which can grow happily in arid regions. The wood is tough, and is used to make tools and farm implements.
Dodonaea is called Netrani in Kannada, and has many medicinal uses. The leaves are used for tooth ache.
The winged capsules change colour from light green to maroon red.
Dodonaea is named after the 16th century French botanist Dodoens. Viscosa means sticky in Latin.
Posted by lotusleaf at 11:01 PM 5 comments: