Kurinji, the Twelve year Wonder of the Western Ghats 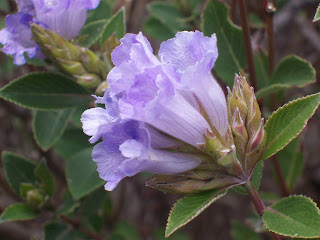 Some of the hills in the Nilagiri part of the Western Ghats are draped in a blue haze. The mass flowering of the Kurinji flowers Strobilanthes kunthiana is at its height on grassy hills near Ooty now.Whole hillsidesare covered in these perfumed wild flowers now. The Kurini flowers once in twelve years, and flowers profusely. Populations of the Kurinji in different sites may have different calendars, but the length of the flowering cycle is the same. 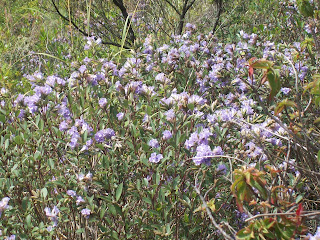 Strobilanthes belongs to the family of Acanthaceae. Plants that flower after long intervals are called Plietesials. According to one hypothesis for this kind of behaviour in plants is that  they exhibit 'Predator satiation'. It is a strategy developed by these monocarpic plants  so that the abundance of floral 'prey' will satiate the insect predators. You can read more about his hypothesis here.http://www.hindu.com/seta/2006/06/15/stories/2006061500421700.h 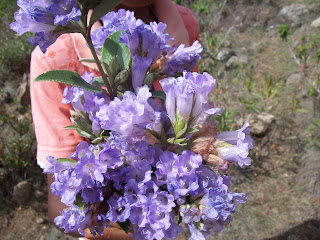 The plants reckoned without the human predator, it seems. The Kurinji land is now Tea land, with hectares of tea plantations coming up in their habitat. To see these flowers yesterday, we had to walk through a tea plantation and clamber up a rocky outcrop. Our little guide Santosh is holding out a posy of Kurinji flowers for me in this picture.
Kurinji flowers are a symbol of yearning and love in ancient Tamil literature. The plant was first studied and described to the western world by the German botanist Christian Gottfried Daniel Nees von Esenbeck . The name' kunthiana' is from the river Kunthi which flows through the southern part of the Western Ghats.
Posted by lotusleaf at 12:53 AM 12 comments: 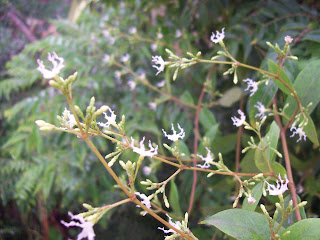 Two days ago I saw these wild flowers on a vine which had crept up my Curry Leaf tree. The beautiful tiny white flowers resemble the flowers of the Tabernamontana. The creeper exudes 'milk' when a twig is plucked. The flowers have no scent. 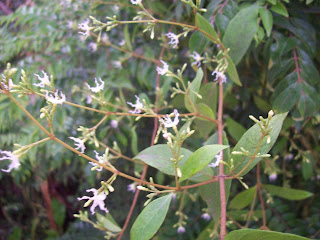 This year, because of the failed monsoon and the ensuing water crunch, many parts of the garden failed to get any water. This creeper, which I think is a native , must have had no competition from exotic plants, and has quietly, but determinedly crept up my Curry Leaf tree.
All native plants have medicinal uses in Ayurveda, but I could not find anyone to identify the plant..
Can you identify it?
Posted by lotusleaf at 10:37 PM 7 comments: