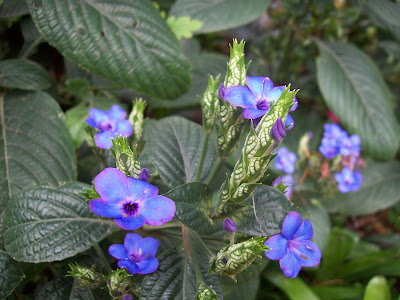 The Eranthemum nervosum, or Eranthemum pulchellum is a native Indian flower full of surprises. Its bright blue colour of the flower is very unusual in the tropics. And the plant flowers even in the summer. The dark green leaves look very striking in the shade. Once the flowers have finished blooming, the branches can be cut down to ground level, and the plant sends out more branches and flowers. Aphids and white flies are the plant's pests.
This is a good plant to grow in dappled light in the tropics. 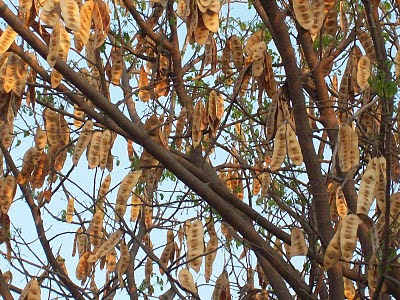 The Siris, or Shireesh tree Albizia lebbeck, is not a common tree in urban areas, although it is a native of India. I found this tree on the banks of the River Krishna last month. Although it had finished flowering, there were a few cream coloured , brush shaped flowers here and there. But they were all high up, out of the reach of my camera. The dry pods shivered with each gust of wind, making a rusling sound. This constant sound made by the pods has earned the tree the name of 'Woman's Tongue Tree'- most probably coined by a man.
The Siris is a medium sized tree, and is very useful. Its timber is of good quality, and all parts of it are used in Ayurvedic medicine. The tree is mentioned often in ancient Sanskrit literature. Many men in India are named after it. It is a pity that such a handsome tree is replaced by its cousin Albizia saman , as a preferred shade tree along highways. 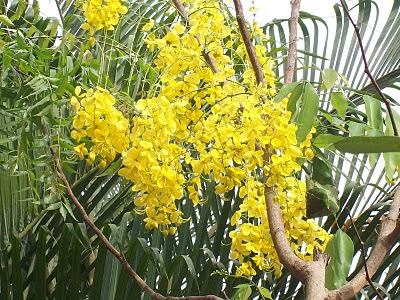 The Golden Shower tree Cassia fistula has already started blooming now. Called Vishu in Malayalam, it is a sacred tree of the Malayalees and the State tree of Kerala state. It is an integral poart of the Hindu solar new year Vishu, which falls on April 14. 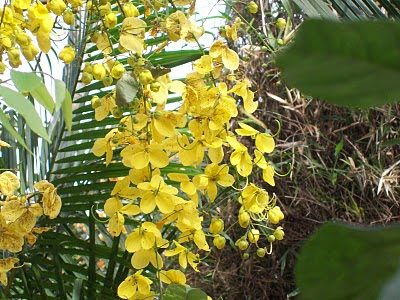 The tree becomes covered with chandeliers of yellow gold flowers in March- April. The leaves are hardly seen during this time. The tree attracts lots of birds and bees. The tree is a native of India, and grows wild all over the sub continent. Tou can see the grape like clusters of yellow flowers in fields and forests if you drive down to Mysore in this season. 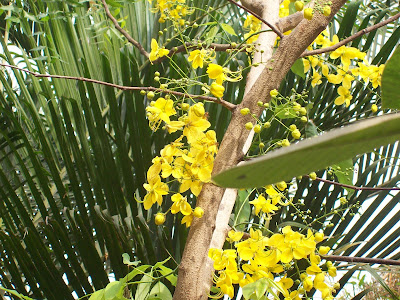 The Amaltas, as it is known in Hindi, is extensively used in Ayurveda for curing many ailments from flatulence to leprosy. A tea made of the flowers is a mild and safe laxative. 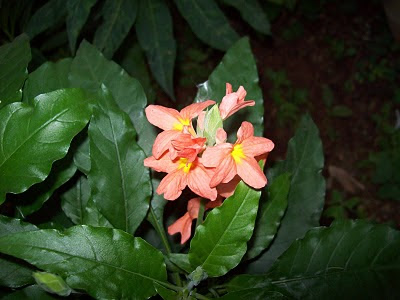 The Crossandra is called Kanakambara in South India. The flowers are orange, salmon pink or yellow. The glossy green leaves make a good contrast with the flowers. The plant is small and compact, making it an ideal plant for a small garden.This native Indian plant flowers almost non- stop through the year if it is given sufficient manure and water. An added advantage is that it can flower in semi- shade too.
The flowers of the Kanakambara are loved by south Indian women for wearing in their hair. The flowers are used in all festivals and in the temples. In Goan weddings, the bride must wear these flowers, as they are considered auspicious. In the City Market, heaps of these scentless flowers can be seen, to be woven into garlands with jasmine for use in temples and weddings.