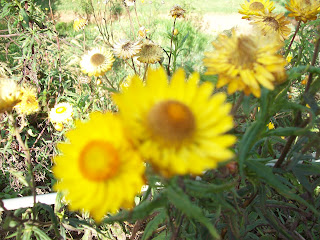 The Golden Everlasting flower Bracteantha bracteata belongs to the family Asteraceae. It is a native of Australia. Its petals feel dry to the touch. We were surprised to see these plants growing like weeds in the Nilgiris last month. They are flowering cheek by jowl with the native Kurinji, which will flower next only after 12 years. I hope these foreign invaders would not have completely displaced our beautiful Kurinji by then. 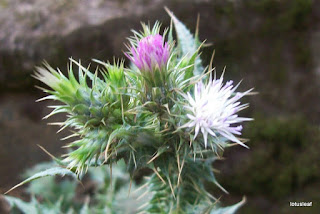 I saw the Milk Thistle Silybum marianum growing wild by the roadside in Ooty recently. It must have been introduced by the Scottish tea planters a couple of centuries ago. 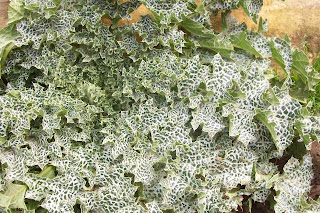 The Milk Thistle is also known as St.Mary's Thistle. It is the floral emblem of Scotland. According to a Scottish legend, the Vikings planned to invade Scotland in the hoary past. To avoid any noise, they took off their boots and advanced towards the Scottish garrison, but they were stung severely by the thorns of the thistles. Their cries of agony alerted the Scots  who drove them away.
The Milk Thistle has many medicinal uses. It is used for the treatment of  liver cirrhosis,. It is also used to lower cholesterol levels,and in the treatment of diabetic nephropathy.
Posted by lotusleaf at 6:57 AM 5 comments: