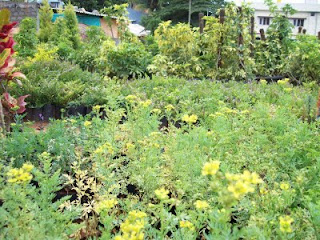 A nursery near my house specializes in the 'snake repellant' Garden Rue Ruta graveolens. The owner of the nursery confessed to me that snakes slither past the rue, but people believe the malodorous plant to be snake repellant, and plant it in many places in their gardens. 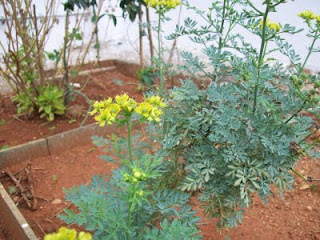 The plant has lime yellow flowers, which also have the same oily smell. The leaves are feathey and bluish green.
The plant has many uses in Ayurveda. The leaves are used for curing cough, cold and influenza. The oil from the plant is very effective in alleviating rheumatic pains. 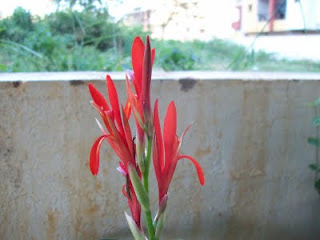 Canna indica, the Indian Shot is not a native of India as its name suggests, but of the West Indies. It has attractive flowers ranging from yellow to a deep red. Its leaves are large and sometimes variegated.
The Canna has naturalized itself in India, and can be seen growing wild along riverbanks and along canals.The seeds are hard , black spheres reminding of pellets of a shot gun. Hence the name Indian Shot.
The seeds are used for making jewelry. In Vietnam, noodles are made from the Canna plant. In China, a wine is made using the flowers of the Canna.
Posted by lotusleaf at 6:00 PM 5 comments: 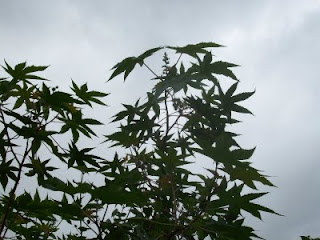 Many of us have orally taken caster oil as a medicine and hated it. Castor oil is taken out from the seeds of the castor plant, Ricinus communis.The plant, although originally from Ethiopia, has naturalized itself in India and other parts of the world. India is the largest producer of castor oil, followed by China. 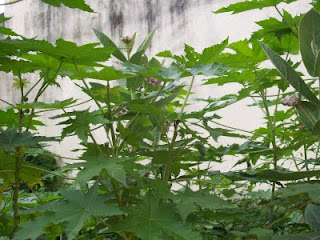 The castor plant grows in all sorts of inhospitable places. Although some cultivars of it are grown by gardeners for the colour and shape of the leaves, one must remember that it is a highly poisonous plant. 8 to 10 seeds of the castor plant can kill a man. The poison recin is in the husk.
Castor oil has been used as a medicine since 2ooo B.C. to cure arthritis .
In Brazil, it is used as a biodiesel. Castor oil is used as a lubricant for racing cars.
Posted by lotusleaf at 5:39 PM 4 comments: