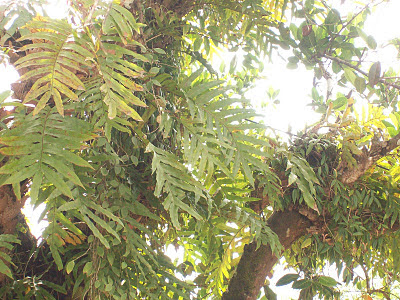 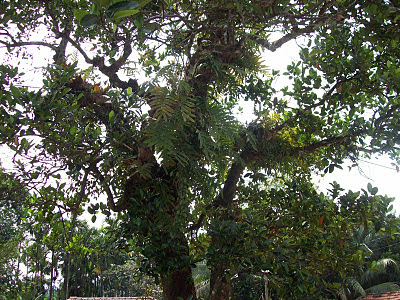 When you drive through the hills of the Western Ghats, you come across this fern clinging to some trees. This is the Drynaria quercifolia, a fern with sterile fronds, like the Staghorn fern. The locals say that this fern eventually kills its host tree. It is called Kage Rekke in Kannada, which means Crow's Wings. Whether there is truth in the fears of the locals or not, this fern is a beauty.
It has many medicinal uses too. Its leaves are used to alleviate fever and cough. It is also used to treat dyspepsia.
Posted by lotusleaf at 5:35 AM 6 comments: 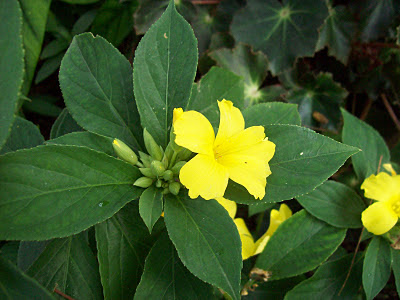 One sees these bright yellow flowers in gardens during winter. It is the Basant, or Reinwardtia indica. This flower is also known as Pyoli in Gharwal. Being a native of the Himalayan foothills, this plant has many medicinal properties. It is used in Indian traditional medicine for the treatment of paralysis. The crushed leaves and stems of the plant are used to heal a suppurating wound. 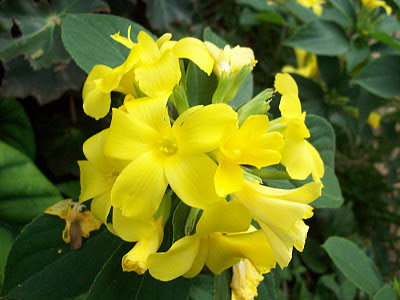 The people of Gharwal associate Pyoli with a folk tale. According to the tale, Pyoli was a beautiful forest maiden, brought up by the plants, animals and birds of the forest. One day, a wounded prince got lost in the forest. Pyoli looked after him, and he fell in love with her. He married her and took her to his palace. But Pyoli missed her forest friends so much that she fell ill and died. The prince buried her in her beloved forest. After some time this plant with cheerful yellow flowers came up from the place she was buried.
Posted by lotusleaf at 6:20 PM 5 comments: