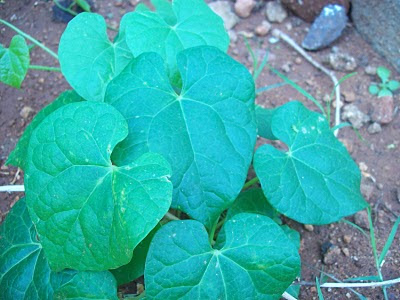 The Amrutha Balli , Tinospora cordifolia is aptly named . Amrutha in Kannada means elixir which gives immortality and Balli means vine. This vine which grows all over India is an elixir which protects from innumerable diseases. Theplant is called Giloi in Hindi. It is used extensively by Indian, Thai and Malaysian healers. The leaves and stems of the vine are dried and powdered, and used to treat liver disorders and Diabetes. The leaves are also used as an anti malarial drug. The powdered dry leaves mixed with buttermilk is said to cure piles.
There are two other varieties of Tinospora, both of which are said to have high medicinal value.